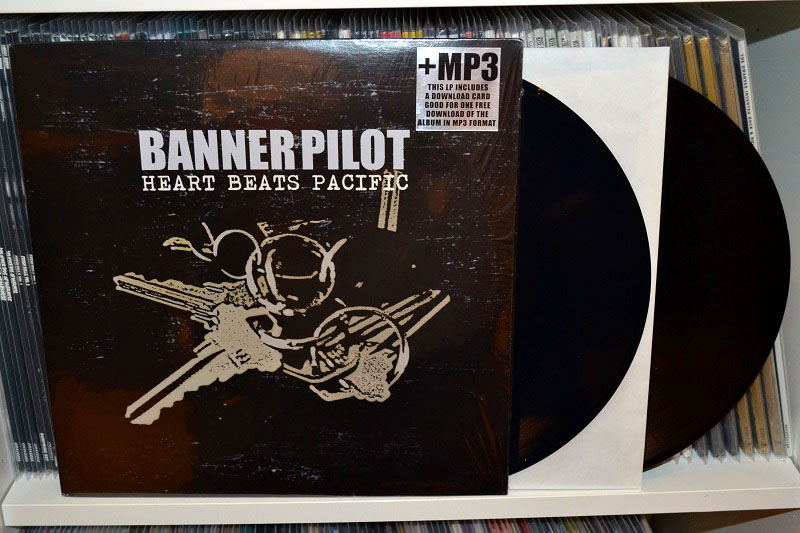 A few years ago, I couldn’t get into Banner Pilot’s earlier albums, Resignation Day and Collapser, so when Heart Beats Pacific came out on Fat Wreck Chords in 2011 I did not really pay much attention to this. With this year’s release of Souvenir and the upfront excitement that spread across various punk music forums, I decided to finally check it out before ordering a copy of Souvenir.

I don’t know why, but after listening to Heart Beat Pacific, all of a sudden Banner Pilot sounded awesome, and now that I got a copy on colored and black vinyl I must concede that this is definitely their best album so far. Songs like Alchemy or Intervention are so catchy that they got stuck in my head for what seems like forever now.

The vinyl itself is not shabby either, although the picture does not do it justice. It almost looks as if there are two black copies, yet the one in the foreground is a translucent dark blue with much black smoke. The color looks spectacular in person, especially when held up against a light source. The translucent blue variant is limited to 467 copies.

I must say, I regret not having picked up that record earlier. But I’m happy that I could get my hands on both variants. I’m spinning it right now while writing this blog entry, and what can I say? My heart beats Banner Pilot.

Check it out for yourself on bandcamp or have a listen: