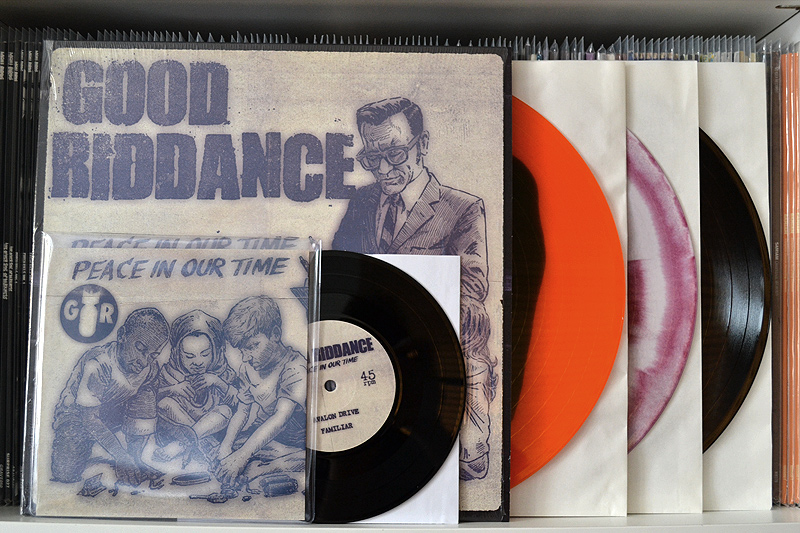 After Lagwagon and Strung Out, the Fat Wreck Chords veterans of Good Riddance have also released their comeback album Peace In Our Time. This is the first proper studio album after 9 years. And Good Riddance are as powerful as they have always been.

Musically this might even be the best GR album so far (together with A Comprehensive Guide For Moderne Rebellion), but I’m missing the dirtiness and grittiness of their previous albums. It’s a top-notch, perfect and on spot production, no discussion, but that’s not what Good Riddance stands for. Personally, I would have preferred a rougher sound. It doesn’t sound as aggressive as it used to do. But that’s like looking for a fly in the ointment. After all, it’s an absolutely amazing and awesome album.

All in all, the record was pressed on four colors. The retail version is the standard black vinyl. From Fat Wreck Chords mail order you could order the white with purple swirl. The black in orange copies were available through Kingsroad Merch Europe and later from the band on tour. On the Pirates Press website you can see that there will also be a clear with purple splatter Fat Store edition. There is also a bonus 7’’ that comes together with a colored vinyl – a black 7’’ with the standard colors and a purple 7’’ with the Fat Store edition. On the B side of the bonus 7’’ you can find the etched GR logo.

If you’re not convinced yet to pick up a copy of this album, go listen to some snippets: