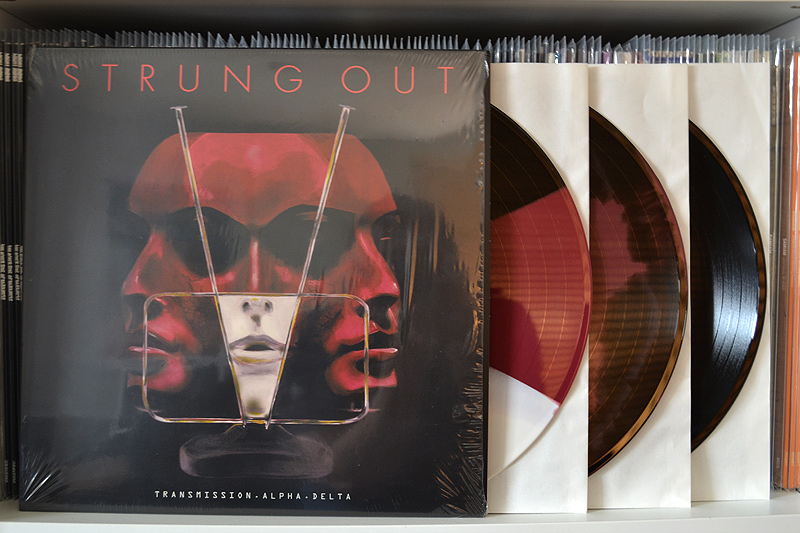 With a long delay of nearly a month, Fat Wreck Chords shipped out the new Strung Out album Transmission.Alpha.Delta on vinyl. It’s the band’s first studio album after the release of Agents Of The Underground (2009). For me, the quality of Strung Out records was kind of down-spiraling with their latest releases. But they totally nailed it this time with Transmission.Alpha.Delta. The B side of the record contains some of the best music Strung Out has released in a decade (if not ever). But also the complete album has everything a Strung Out fan can ask for: catchy melodies, powerful guitars, metallic riffs and galloping drums.

As this is probably the biggest release for Fat Wreck Chords in 2015 and regarding the latest trends, it’s only logical that this record is available in various editions. Altogether there are six different vinyl copies. A standard black retail version, two clear red versions with either black or white splatter exclusively from Kingsroad Merch, each limited to 500, then two versions from Fat Wreck Chords mail order and very likely an exclusive edition available only in the Fat Store. The Fat mail order colors are a nice tri-colored version (black, oxblood and white striped) and a black with oxblood swirl which was only available as a bundle with 13 art prints (one for each song + one extra) done by singer Jason Cruz himself.

I’m still so excited that it’s been hard to pick some samples out of that brilliant record. I’ve chosen those two tracks. Enjoy!