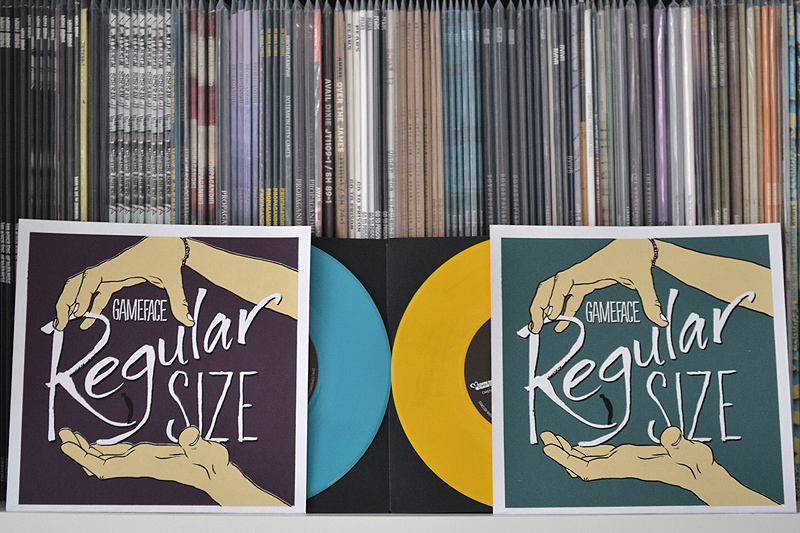 Since the release of their heartbreaking album Every Last Time I’ve been a big fan of Gameface. Last year they released their comeback album Now Is What Matters Now after an 11-year-long hiatus (if you can speak of a hiatus at all). They also released two songs of that album on 7’’. The first one Come On Down had been released a short time before the full length hit the streets. Later last year they put out the second 7’’ Regular Size. The B side is a previously unreleased cover version of Justin Timberlake’s song Mirrors in best Gameface style.

The two 7’’s as well as the album were released in the US by Equal Vision Records. While the full length came out on Redfield Records in Europe, this 7’’ is a co-release of Unless You Try Records (UK) and Coffeebreath And Heartache (Germany). Today I received the two versions of Coffeebreath And Heartache on blue and yellow vinyl, both limited to 100 copies. Especially the blue 7’’ is such a beautiful piece of wax. But also the covers are amazing. They are both screen-printed and differ in color – a dark purple cover for the blue 7’’ and a light green one for the yellow 7’’. Coffeebreath And Heartache really did an awesome job with this all around great 7’’. It’s a small record label run by some guys from Bielefeld, who put a lot of effort and heart in their releases.

Go listen to the song Regular Size below and support the label and those nice guys by getting your copy here while it’s still available. Also, if you’re interested in purchasing a pink, silk-screened and hand-numbered copy you can do that in the webstore of Unless You Try Records.